Mixing, kneading, whipping—a great stand mixer can do it all, so you can give your arms a rest and take your cooking and baking up a notch. Whether you’re whipping up a fluffy meringue, mixing together a large batch of cookies, or kneading a heavy bread dough, a stand mixer can help you tackle it with ease.

With tons of stand mixers to choose from, it can be challenging to make sense of the choices. So, we sorted through dozens of stand mixers to identify the best options out there. In our search, we considered the mixer’s capacity, speed settings, design, and price, and we’ve pulled together a mix of highly-rated options ranging from large-capacity bowl-lift mixers to smaller budget-friendly tilt-head mixers. Even better, all of these stand mixers can be found online, so you can add this versatile appliance to your kitchen with just a few clicks. 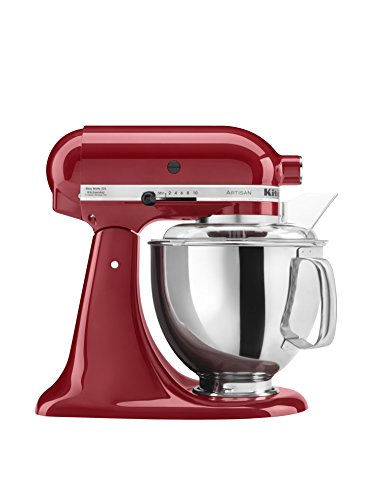 Out of the many stand mixers we considered, one option quickly rose above the rest and earned its place as our top pick overall: the KitchenAid Artisan Tilt-Head Stand Mixer. Boasting thousands of top reviews, this trusted stand mixer offers 10 speeds, a roomy five-quart stainless steel bowl, and a variety of attractive color options sure to suit any kitchen.

Featuring a tilt-head design with a five-quart bowl, the enormously popular KitchenAid Artisan Tilt-Head Stand Mixer is a trusted stand mixer that tops our list as the best choice overall. With its easy-to-use 10-speed slide control and stainless steel mixing bowl with a convenient handle, this KitchenAid stand mixer is equipped to make mixing, whipping, and kneading a breeze.

Boasting several thousand five-star reviews on Amazon, this KitchenAid is a trusted favorite for home kitchens—it is consistently praised for its just-right size, its durability, and its smooth tilt-head design that makes it easy to use. In addition to being an effective workhorse on its own, this KitchenAid mixer also allows for extra versatility by being compatible with more than a dozen optional attachments, such as pasta makers, food grinders, and spiralizers—so you can experiment with all sorts of recipes with one powerful appliance.

As an added bonus, this stand mixer can also add a unique touch of style to your kitchen thanks to its many available color options. And for easy cleanup, the stainless steel mixing bowl, flat beater, and dough hook are all dishwasher-safe. 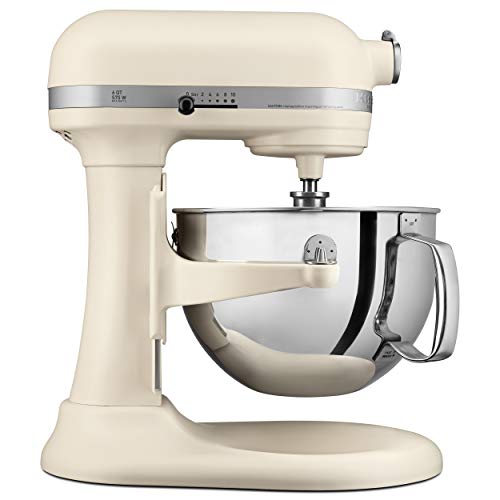 If you’d prefer a stand mixer with a bowl-lift design rather than a tilt-head design, the KitchenAid Professional 600 Series Bowl-Lift Stand Mixer is your best bet. Featuring a large six-quart stainless steel bowl, this KitchenAid is designed to tackle large batches of heavy, thick ingredients that smaller mixers might struggle with.

With its bowl-lift design, this mixer functions differently from the tilt-head mixers here, in that the head stays in place while a lever raises the mixing bowl into its proper position. This design is meant to offer added stability when taking on dense mixtures, making this KitchenAid a great pick for those who plan to make large batches of tricky-to-mix ingredients.

Featuring a 575-watt motor with 10 speed settings and coming with a stainless steel wire whip, a spiral dough hook, and a flat beater, this bowl-lift stand mixer from KitchenAid can whip, knead, and mix ingredients to suit your needs. This mixer also comes in a wide variety of color options ranging from bright yellow to black, so it can blend right into your kitchen or add a pop of color, depending on your preference. 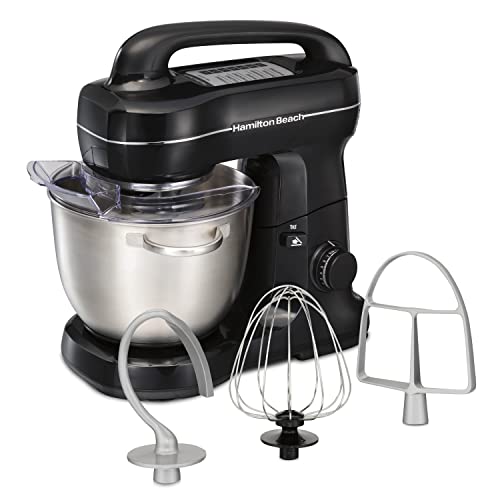 Offering a highly-rated stand mixer for an affordable price, the Hamilton Beach Electric Stand Mixer is a great choice for those who want a versatile stand mixer that gets the job done without breaking the bank, as the best budget stand mixer on our list.

With its four-quart stainless steel bowl, this tilt-head stand mixer is slightly smaller than the other options on our list, so it’s a budget-friendly choice for those who don’t need to create extra-large batches at once. Powered by a 300-watt motor, this Hamilton Beach mixer also includes seven speeds with a mixing guide at the top, so you can easily control the type of mixing you do for different uses.

Still offering a lot of function for its affordable price, this stand mixer comes with a dough hook, whisk, and flat beater, as well as a splash guard to help minimize mess. And for easy cleanup, the mixing bowl and all three attachments are dishwasher-safe. 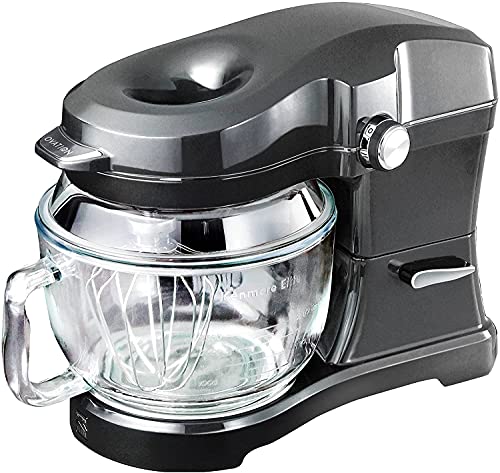 Featuring a pour-in top that allows you to add ingredients to the mixing bowl without stopping it, the Kenmore Elite Ovation Stand Mixer offers the most unique design here. Beyond its convenient pour-in top, this mixer also boasts a 360-degree splash guard that is designed to keep the bowl fully covered—so you can keep the mess to a minimum.

This uniquely-designed stand mixer features a powerful 500-watt motor and offers 10 speeds with simple controls, and even includes a thoughtful LED light for added visibility—so you can more easily see what you’re working on. If you need to move this stand mixer around the counter, simply tilt it and glide it, no heavy lifting necessary. You can also feel a little more protected with your purchase, as this stand mixer comes with a five-year warranty.

For extra versatility, this pour-in top mixer from Kenmore also comes with nine total accessories and attachments, including an egg separator, grater, pouring-shield funnel, flat beater, dough hook, and more—almost all of which are dishwasher-safe, for hassle-free clean-up. In addition to these accessories, this stand mixer also comes with a cookbook featuring 15 recipes, so you can start experimenting with new recipes right away. 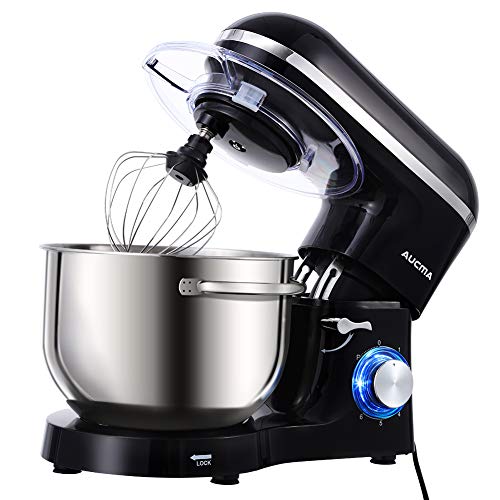 With its 6.5-quart mixing bowl, the Aucma Stand Mixer stands out as the largest-capacity mixer on our list, making it a great choice for those eager to mix up extra-large batches at once. The large mixing bowl also features two handles on its sides, so you can more easily maneuver the bowl even with heavy batches.

Boasting a 660-watt motor and a tilt-head design, this large stand mixer from Aucma also comes with a splash guard to keep the mess in check. To tackle different recipes, this mixer also offers six speeds and a pulse function, and it comes with a whisk, dough hook, and beater attachments.

Whether you’re mixing up large batches of chocolate chip cookies or kneading heavy bread dough, adding a quality stand mixer to your kitchen can be a game-changer. For other useful appliances that can make your cooking and baking easier, check out The Best Cast Iron Skillets.