Board games are a great way for teens to connect with their friends away from their electronic devices. A good board game encourages critical thinking and collaboration, but more importantly it has to be fun and interesting. Finding the right game for your teen can be difficult since many games are too easy to play, leaving them bored. But we’ve pick out some great options that are complicated enough to keep their interest, but still age appropriate. Whether they want to work with their friends and family or play against them, we have excellent choices to keep them entertained and having fun.

We reviewed dozens of board games for teens to identify the best of the best. We looked at complexity, enjoyability, gameplay, and how easy the rules are to understand. You can purchase all of these games online at Amazon.

Best Board Game for Teens Overall

Exploding Kittens
Try to be the last player standing in this silly and hugely popular card game full of cat yoga, lasers, taco cats, and exploding kittens.
$19.99
Buy on Amazon

Our top choice for the best board game for teens is Exploding Kittens. Don’t worry, no kittens are harmed in this crazy and hilarious card game. It’s a game of chance where the goal is to stay in the game as long as you can, but if you get an exploding kitten card – you’re out!

The 5 Top-Rated Board Games for Teens

Best Board Game for Teens Overall

Exploding Kittens
Try to be the last player standing in this silly and hugely popular card game full of cat yoga, lasers, taco cats, and exploding kittens.
$19.99
Buy on Amazon

The Exploding Kittens card game is a hilarious, family friendly game that can be played by kids, teens, and adults. One of the most funded projects on Kickstarter and featuring cards illustrated by The Oatmeal, this highly strategic game of chance and elimination is a favorite for both large and small groups.

Players take turns drawing cards from the deck, but watch out, if you draw an exploding kitten card, you’re out of the game unless you can stop the explosion with a defuse card. You can also try to stay in the game as long as you can by playing the specialty cards that let you skip your turn, peek at the deck, steal cards from other players, or hide an exploding kitten card somewhere in the deck.

Exploding Kittens can be played with 2-5 players and takes only 15 minutes to learn how to play. There are also expansion packs if you want to play with more people. Reviewers say this hilarious game is easy to understand and that both kids and teens love playing it. They also say it’s a great game for parties or to play with the entire family.

Best Strategy Board Game for Teens: Catan The Board Game

Best Strategy Board Game for Teens

Catan The Board Game
Gather resources, build towns, and expand your civilization in this popular strategic board game.
$43.88
Buy on Amazon

Originally called Settlers of Catan, this strategic game was rebranded to Catan The Board Game but features the same rules and gameplay. This hugely popular board game has won multiple awards and is a favorite of both teens and adults. Build your civilization by collecting and trading materials, use resources to build houses and towns, and grow your civilization by connecting them with roads or blocking your neighbor’s. The game board can be set up differently every time, so the game doesn’t become boring or repetitive, and a player’s strategy will have to change each time they play.

This game depends on trading, tactics, strategy and a bit of luck. It’s best for 3-4 players and there are multiple expansion packs you can purchase to play with additional people or expand the board. The rules are a bit more involved, making this game possibly too complex for kids, but a great choice for teens. There are also many online videos and walkthroughs to go over the rules and how to play. The gameplay is pretty straightforward, and reviewers say it moves along quickly. Many reviewers say this game is very likely to become a favorite.

Catan The Board Game Key Features:

Best Budget Board Game for Teens

Taco Cat Goat Cheese Pizza
This quick moving card game will have teens laughing as they try to slap the card pile on the right cue.
$9.99
Buy on Amazon

Taco Cat Goat Cheese Pizza is a fast-paced card game with a crazy name. Somewhat similar to the game Slap Jack, players take turns flipping a card from their hand face up in a pile on the table while saying the next word in the phrase “taco/cat/goat/cheese/pizza”. When the picture on the card matches the word being said, everyone slaps their hands down on the card. The last person with their hand down takes the entire pile of cards, and the first to run out of cards wins. But beware, some specialty cards mean you have to rush to make silly gestures before slapping the cards.

This is a very simple game to learn and is perfect for groups of people looking for a fast paced and funny game. Reviewers say this game is one of the most fun and competitive party games they’ve played. They think it’s a great option for people who don’t play a lot of games since the rules are simple and it’s easy and fun to play. And for only $10, it’s a great choice for your teen to bring along the next time they get together with friends.

Best Cooperative Board Game for Teens

Forbidden Isaland
Players must work together to find the treasures and escape the sinking island in this cooperative board game.
$18.61
Buy on Amazon

Forbidden Island is a race against time as players must work together to find 4 treasures from the ruins of a dangerous island that sinks with every move. The players act as a team of explorers and use the flood, treasure, and adventure cards as they move around the game tiles. The only way to win is to collect the treasures and get everyone off the island before it sinks completely under water.

This cooperative game is easily customized for difficulty level, with the players able to adjust the “water level” before the game begins to determine how tricky it will be to win. Each player is given a character with different strengths, so they must work together to beat the rising water through collaboration. The board is randomized every time you set it up to play, so it’s always a new adventure.

A great game to play with friends, this works best with 2-4 players. Reviewers say it’s a fun and entertaining game that is interesting enough to engage teens and adults. They also say it’s a great family game since there’s no competition, but they often have to explain parts of the game or rules to players younger than 10. Teens should find the game challenging and entertaining.

Best Party Board Game for Teens 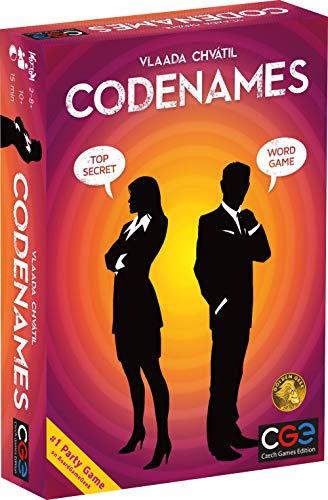 Code Names
With only single word clues from their spymaster, teams have to figure out which cards are their secret agents, without picking the other team’s.
$14.65
Buy on Amazon

Codenames is a great game for your teens to play with a group of friends. Players are split into 2 teams and 25 secret agent cards labeled with random words are played faced up on the table. Each team has a spymaster who knows the identities of these 25 agent cards, however the rest of the team only knows their codenames. The spymaster gives one-word clues that refer to the words on the cards, and their team members have to guess which cards they mean without choosing the other team’s agent cards.

This clever game can be played with 4 people, but it’s more fun with larger groups. Reviewers like that it can be played with more people and say it’s harder than it seems to come up with words that your teammates will understand. They also like that it can be taught in under 5 minutes and that it’s very easy to pick up, even if it’s not always easy to figure out what your spymaster is thinking. It’s a great game for laughs and group collaboration to beat the other team.

All of these games are great options for your teens to play with their friends or family. If you’re looking for board games for a younger audience or games the entire family can play, take a look at our list of The Best Board Games for Kids.